The Unconscious Reality: Rain Inside

Madrid: In Rain Inside (Current Exhibition of Excelencias Cultural Space) the Mexican Artist Andrés del Collado combines his country’s folklore with mobile elements that run away from the canvas. Based on water, which is the main element of this exhibition, the painter creates an illusory game between surrealism and materiality. 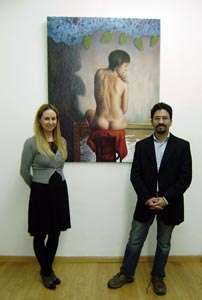 In your work, one can observe a stronger trend towards hyperrealism. Is this just by chance or this is a deliberate point of view?

In my work, water is an unconscious symbol; hyperrealism is the way to express the conscious part, what is true to reality, what we know, what is tangible, visible… Iconography is a door to enter the symbolic world, the oniric world. A game between what is real and what is not real, that is hidden in the unconscious. Our way to look is determined by memories (kept in the unconscious); every instant, reality is conditioned by culture, by experiences and it has an impact on our way to perceive the world.

What are your artistic referents?

Mexican Culture has some surrealist elements (according to Andre Breton), which are a source for my work, and also the game between what is real and subjective of  Rene Magritte, Salvador Dalí, Giorgio de Chirico, the Mexican Rafael Cauduro’s hyperrealism. Even when I retake surrealism’s own codes, these works go deep into introspection, into the unconscious, by means of symbols, to emphasize this relation between subjective-objective and to break with the traditional canvas format.

You refer to the classics from the 20th Century. What would you highlight out of the current artistic panorama?

Maybe the contribution of the installation as an artistic contemporary tendency, which has had an impact on my work as, in order to enrich the visual space, I add not only the traditional two- dimensional painting but the three-dimension real elements like objects, pieces, etc. 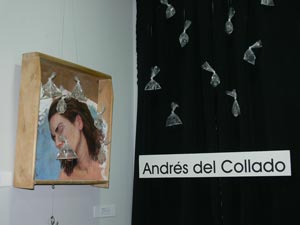 The cult for water evokes references to ancient cultures, including the Mexican ones. Have you been inspired by this anthropologic idea or this is only the result of an internalized surrealism?

I use universal archetypes, symbols that tell about human conditionings, and not only belong to the Mexican culture. Maybe the colors and some elements could trace back to the rot of my own culture. I have assimilated several sources: psychology, religions, astrology, legends, myths and psychoanalytic internalization. The introspective journey and symbolism overlap.

You have made a great work of personal internalization. You comply with the principle that, for the artist, each work of Art is an element of purification or catharsis…

Art is the extension of oneself, it is mirror where you can find yourself, where you see yourself reflected and, as such, there is a possibility that the public is reflected through the image. Art allows guiding observation, experience; it is catharsis and purification at the same time. It helps to open the windows of the Mind.

Many of the pieces exhibited here convey a message about decisions, about time and the Human Being inside very real scenarios (the ocean, a chair, a bath tub). It is like if, in spite of a prevailing surrealism you do not want to abandon daily matters, not completely…

I try to show reality, a distorted reality or impacted by the unconscious.

Almost always, there are elements (experiences, favourable or undesirable situations) that distract us, that are melted with the past. We are the result of a past and we do not see reality as it is. We are always influenced, conditioned, like looking through a bag of water; there is distortion in our appreciation of reality, alteration, we magnify the image that we see. 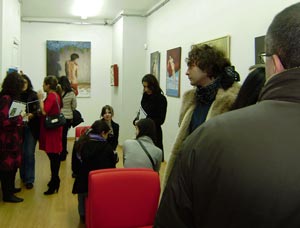 We should also highlight your work as a muralist (although you do not really work on fresco, but on big size works), very much related to the Mexican tradition…

The contribution of Mexican Muralism to Universal Art is in the roots of pre- Hispanic cultures. The Revolution of 1910 turned Muralism in a need to communicate on big-size formats; the idea was to take Art to the people, with ideological purposes to enhance patriotism, etc. I am familiar with big-size formats as Mexico is very rich in terms of space and monuments, either pre-Columbian buildings or colonial ones. Population density allows that they can be seen by more people. In general I have assimilated elements from the four big representatives of the Mexican Muralist School:  José Clemente Orozco, David Alfaro Siqueiros, Rufino Tamayo and Diego Rivera. Maybe my monumental work is more influenced by the latter in terms of color and extent of realism.

And talking about Mexico, do you see big differences between the artistic scenario of Mexico and that of Spain?

Latin American Art and, particularly, the Mexican Art, is rich to the extent of joining together color, symbolism and the concepts of three cultural stages: Pre-Hispanic, Colonial and Western Contemporary. This generates a melting pot of interpretations and cosmovisions of Art. It is a young, fresh, rebel and innovative Art, eager to be interpreted.  Spanish Art is rich in traditions and the generator of the big trends and the best universal examples: an Art strengthened by experience; even though, I think, it is not assimilating anything from the universe out of its borders.

In Spain you collaborate on regular basis with Institutions like la Tabacalera, combining it with personal works, galleries, etc. Now you are exhibiting in Excelencias Cultural Space. What is your next Project?

In 2011 France celebrates the Year of Mexico. I have been invited to show a monumental work. This work will be made in Madrid to be exhibited, in an itinerant way, in Marseilles and other French cities. I have scheduled an exhibition in Berlin to continue the one made in 2010.

The Exhibition Rain Inside by Andrés del Collado can be visited from 10.00h to 14,00h and from 17.00h to 20.00h, from Mondays to Fridays in Excelenecias Cultural Space on C/ Magdalena 8 de Madrid (Metro Tirso de Molina).