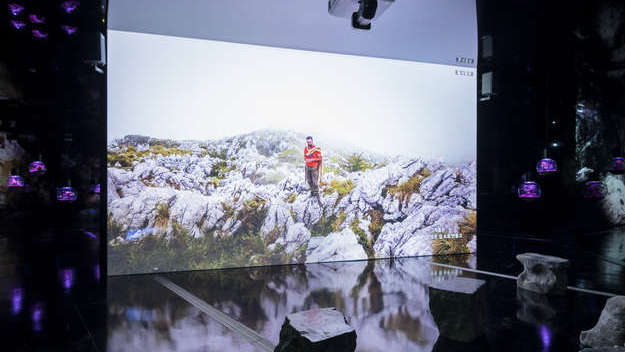 What is a garden, a habitat, a sphere, a ‘cave’? What spirits live there and how do they show themselves? Directly engaging with the Kunsthaus Graz, the outstanding international artist and essayist documentary filmmaker Hito Steyerl creates a many-layered, intertwined digital and analogue installation in the dark dome of Space01.

Hito Steyerl’s immersive installation at Kunsthaus Graz presents the interactive retelling of the work Cave, produced for the MMCA Seoul in 2022.

‘Animal Spirits is a term British economist John Maynard Keynes coined in 1936 to describe the influence of human emotions on markets. Fear and greed interact to create a sphere of irrationality. The pseudo-naturalist idea of the “survival of the fittest” controls human ideas of society and exchange.’ (Steyerl)

The starting point of the exhibition is Steyerl’s essayistic film Animal Spirits. It shows Nel, a member of the Spanish collective INLAND, shepherd, YouTuber and cheese maker. From here a multi-layered installation unfolds, its exchange of energy and data mutually pollinating and enlivening and reflecting on the power of the image itself. A black square on the roof of the Eiserne Haus thus refers to Malevich and the end of painting (and victory over the sun) announced in 1915. At the same time, it serves as a solar panel that supplies part of the installation’s energy consumption, including the plants in Space01. These grow under artificial UV light and are equipped with sensors that set in motion the walls around the main film, projected with cave paintings. An arc is thus traced to energy consumption through the global data transfer in (image) communication.

Visitors find themselves in a cave ‘where different species interact and animal paintings on the walls become animated. A live simulation, partly controlled by movement and plants, shows dancing AI-imagined paleolithic animals.’ (Steyerl)

Once again the installation explores communal life in the information age, and in doing so also addresses the question of the image and its truth content as a pure document. In Die Farbe der Wahrheit (The Colour of Truth), Steyerl writes that ‘in the face of increasingly precarious truth and testimony of images, the form nonetheless tells a truth about the context of the image, its production and its conditions’. In this sense, the question arises – as in Plato’s Cave – concerning Animal Spirits in the Kunsthaus as to whether the digital fire projects the dancing creatures on the wall only as silhouettes of our unfounded fear. What real threats to our immediate environment are revealed behind them in the energy expended, in its use, consumption and particularly in its value chains? In the year 2022, when the question of the winners in our energy consumption has taken an unexpectedly pointed turn, Steyerl’s speculative narrative of groping in the dark appears not just uncanny, but quite oppressively visionary.

Steyerl’s works are poignant analyses of our highly technologised society. They identify the image as a site of world perception in multiple, partly interactive narratives and play with the manipulative power of the visual. In this, the artist follows the ‘reality extended by technology’ and both critically and subversively examines ecological systems and their connection to global financial and commodity flows, migration and the question of participation in existing power structures.

In the swirl of pulsating images, digital rhythms and sounds, Steyerl allows the audience to speculate on the relationship between technological structure, biological life and systems for retaining power. But she also prompts reflections between our own behaviour in real space that has long been a hybrid and our own promotion of a fundamentally exploitative system.