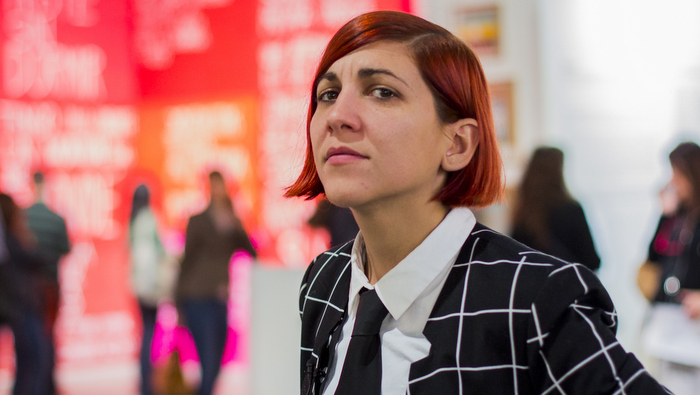 With regard to the twenty-eighth edition of arteBA (Annual Contemporary Art Fair in Buenos Aires), to be held from April 11 to 14, 2019, Arte por Excelencias exclusively talks with Julia Converti, its general manager.

What particularities will the 28th edition have?

It comes with many novelties. One of the biggest bets will be the new lay out of the fair, which will offer a completely new experience to the visitor, an architectural redesign with change of pavilions, incorporating the exterior of La Rural as part of the exhibition and the program of activities that will be offer to the public. In this sense, the program of talks at Art Basel Cities Buenos Aires and the week of art in Buenos Aires will be added in the framework of arteBA, and in collaboration, an initiative to amplify the week and give prominence to culture.

It has transcended that the Fair will bring together around four hundred artists, represented by more than eighty galleries of more than twenty-five cities of the world. Which cities will be participating? What esthetic budgets were taken into account for the selection of the galleries?

In this edition we have the pleasure of having representatives from four continents, constantly expanding the international scope of the fair, with the aim of building bridges between Latin America and the world. Some of the cities represented are Buenos Aires, Mexico, Caracas, Montevideo, Lima, Santiago de Chile, Rio de Janeiro, Bogota, Santo Domingo, Guatemala, New York, Paris, Madrid, Brussels, Barcelona, ​​Berlin and Johannesburg.

On the other hand, Hong Kong and the Philippines are included from Isla de Ediciones. The galleries at arteBA are selected by independent and autonomous selection committees or invited by curators in specific sections such as Solo Show Zurich or Cardinal Site.

There are no single selection criteria, it depends on each of the sections and the profile of its members and curators. What always prevails is the quality of the proposals and in many cases their freshness and originality.

Tell us about the program of complementary activities, as well as the topics of the talks and conferences.

The talks and conferences will take place in two programs with different proposals: on one hand Isla de Ediciones Fundación Proa, where you can attend book presentations, lectures on issues related to the digital age in the publishing industry, the relationship of the archive and the publications and diverse subjects of the contemporary art; On the other hand, the public can attend the Art Basel Cities: Buenos Aires Talk Program, in collaboration with arteBA that will take place inside and outside the fair and will present activities in two formats: Master Classes and Parallel rooms, a marathon day with various talks between local and foreign actors. You can consult the full program on our website www.arteba.org.

As complementary activities, three programs stand out: the VIP Program, which we made thanks to the support of Santander, offering an exclusive agenda for international collectors with the aim of publicizing the local art scene and enjoying the city; Networking, which offers an agenda designed to establish crossings and collaborations between Argentine and foreign art professionals; and finally, the acquisition program of local and international museums, which has the participation of more than twenty museums that acquire works at the fair to increase the collection of their collections.

What roles will the Blue Pavilion and the Equine Pavilion play in this edition?

The division of the layout of the fair and the new exhibition proposal of both will generate a great change in the level of public circulation and fair experience. The Equinos de la Rural pavilion will house all that is the young, emerging and editorial proposal of arteBA: Bombay Utopia, conformed by seventeen galleries, made up of 17 galleries, many of which participate for the first time of the fair, and curated by Carlos Herrera and Alejandra Aguado, bet on an absolutely novel exhibition display that manages to relate the production of all spaces. In this same pavilion, the visitor can enjoy Isla de Ediciones / Proa Foundation, a space dedicated to the publishing world with a large library, guest editorial projects from different cities of the world and a special sector of independent publishing production.

On the other hand, the blue pavilion will have 11,000 m2 of art to discover and, why not, buy. A very interesting option is to make a first tour of the fair through the Cabinet GNV Group, seventeen proposals from modern and contemporary artists such as Marcia Schvartz, De la Vega or Ad Minoliti, Luciana Lamothe, Nicolás García Uriburu, Dalila Puzzovio, who present the galleries in different parts of the fair. To have a good regional panorama of outstanding artists, I recommend visiting Solo Show Zurich: 8 proposals by Latin American artists, invited by José Luis Blondet. Then, to give a little contrast to the route would go up to the "modern" square, where to see historical and consecrated artists such as Martha Botto, Berni, Martin Blaszko, Polesello, among many others. Then, in Cardinal Site, you can see dialogues between artists or galleries from different geographical areas. In the contemporary plaza there will be young artists and galleries in Stage, a section that we launched in 2018 to support the galleries in their growth and to point out works by young artists. For those who come with children, arteBA Children will offer, thanks to the support of the Ministry of Culture of the nation, various activities framed in a playful proposal dedicated to the little ones. And for those who wish to visit the fair thematically and from the hand of important industry leaders, the guided tours of the city, coordinated by Laura Batkis, will be the perfect option.

What proposals will bring Utopía Bombay during the week of art in Buenos Aires?

When considering a new space and with a new disposition, this section will be presented with a completely renewed spirit. The curators, Carlos Herrera and Alejandra Aguado, pose it as a space in which they think, from architecture, the relationships between body and matter, between matter and space, and between space and expression. The most current artistic production will be displayed in Utopia, offering the visiting public a diversity and young avant-garde and great options to take the first step and be encouraged to buy.

Will participate spaces from several cities in Latin America and a special participation of Spain.

The Fair is not limited only to the exhibition space, but includes an editorial platform. Tell us about Isla de Ediciones-Fundación Proa and the coordination of independent publications.

Isla de Ediciones is a section that we launched in 2013 with the complicity and support from Proa Foundation and the conviction of the importance of adding an editorial platform that gave a theoretical framework to the fair by offering titles and editorial projects to the visiting public. For the edition of this year, we invite Agustín Diez Fischer, director of Fundación Espigas, the largest archives of Argentine and Latin American art, to curate the contents and to ally institutionally with the project. In addition to six invited projects from different parts of the world and the library of titles that broadens the offer, Isla de Ediciones presents a selection of independent editorial proposals invited by Pulso-panorama of independent publications. As a novelty of this edition will incorporate a collection / digital library of curated titles, to download for free using QR codes.

Previous publication A Biennial with 35 years of history Next publication Havana in Biennial: a large urban museum