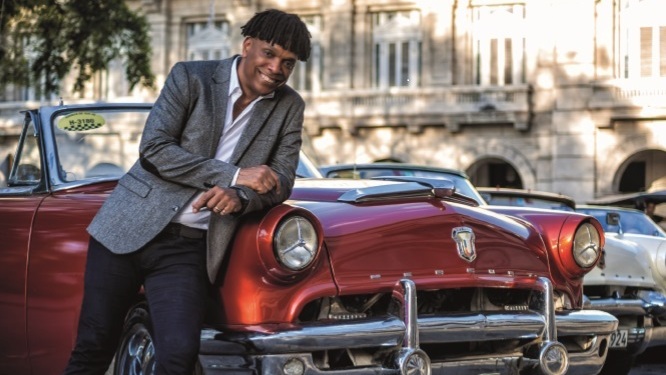 Giraldo Piloto Barreto, president of the Fiesta del Tambor Festival, from a family of famous Cuban musicians, studied and graduated in 1980 from the National Arts School of Cuba. His first job was in the Orquesta del Cabaret Tropicana; he’s founder of the group NG La banda of José Luis Cortés (El Tosco), and he was also the director of the Orquesta de Isacc Delgado, when in 1995, he decides to create his own group called Klimax, which enriches the popular dance music and the Latin jazz.

«We’re very connected to the Fiesta del Tambor Festival Guillermo Barreto in Memoriam, which appears in the year 2000, from a proposal by the Cuban Ministry of Culture to pay homage to my uncle. We join other institutions to the festival, their services spread all over the event, which becomes a multicultural experience thanks to the participation of dance companies, popular dance music orchestras, traditional groups, jazz clubs, professional Cuban and foreign musicians, artists of the Plastic Arts,…».

«In this 17th Edition of the Fiesta del Tambor Festival, this occasion in honour to Brazil, we’ll count on Brazilian artists such as João Donato de Oliveira Neto, one of the most important pianists of the Brazilian music, the percussionist Nanny Assis; the famous singer Fabiana Cozza, and the feminine group Baque Mulher RJ, which calls out the African origins in Latin America».

«We’re also having important guests as the singer Janis Siegel, nominee seventeen times and winner of ten Grammy Awards as member of Manhattan Transfer; the great Mexican drummer Antonio Sánchez; the Canadian percussionist Aldo Mazza, who will represent the KOSA company and the outstanding American percussionist, Arnie Lang, who will give a special class to young talents in the Superior Arts Institute of Cuba on the 5th March, where we’ll have a welcome party to the participants, which will show the program from the 6th to the 11th March; there will take place three competitions opened to everyone from everywhere: percussion, casino dance and rumba».

«Finally, the festival will take place on several seats such as the House of Culture of Plaza, the Mella Theater, the Avenue Hall, El Salón Rosado of Tropical, the Gardens of the Mella Theater, and so many others, where people will be able to enjoy concerts of the most significant Cuban groups of the popular dance music, for instance, Alexander Abreu y Habana De Primera, Manolito Simonet y su trabuco, Los Van Van, Isacc Delgado y su grupo, Pupy y los que son son, Klimax group, and from rumba,  Los Muñequitos de Matanzas, Columbia del Puerto, Yoruba Andabo, Timbalaye, etc.».