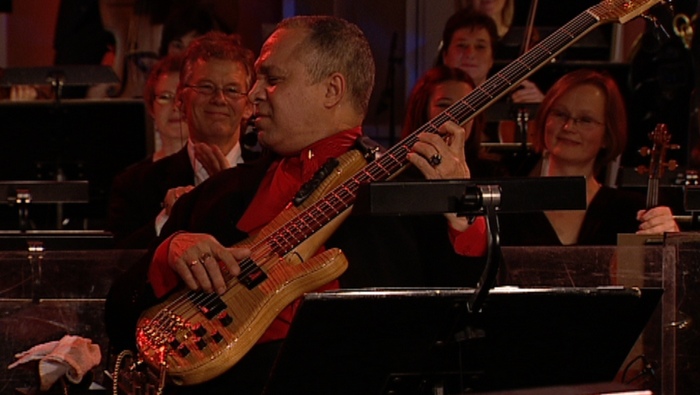 Carlos del Puerto: «The Cuban guitar school has always been at a very high level worldwide»

On August 1 and 2, the bassist of the famous group Irakere, Carlos del Puerto, will perform in Havana, after several years of absence, along with the Norwegian pianist, director and arranger Sverre Indris Joner, presenting his project Clásicos a lo cubano. The performance will be together with the Symphonic Orchestra of the Gran Teatro de La Habana.

Sverre Indris Joner is a musical director, arranger and pianist. In the 80s he discovered the genre of salsa and since then his career took a path to investigate this genre that captivated him. He recently brought to light the discographic project entitled Clásicos a los Cubano for quartet and symphonic orchestra. Imagine the Quinta de Beethoven fused with an authentic salsa or The Blue Danube by Johan Strauss in cha-cha-chá, but preserving the essence of those famous classic pieces.

Carlos del Puerto - born in Havana in 1951 - is one of the Cuban musicians with the longest and richest artistic career as a performer and teacher. In his more than 50 years as a professional he has been part of many of the most important musical groups of recent decades. In 1973 along with Chucho and Oscar Valdés, Jorge Varona and others, Irakere is one of the most important groups for the projection of Cuban music in the world and where Del Puerto worked for 26 years.

Carlos del Puerto currently resides in Finland, where he works as a teacher and director of the big band of the Music Institute of the Turku Conservatory and has been musical director and arranger of some of the most famous Finnish artists such as Jari Sillampa, Robin, Anna Hanski among others. Here are his statements exclusively for Arte por Excelencias.

From Sonorama 6 to Irakere, going through other important formations, how much did all this help to "mold" your creative and at the same time innovative spirit within music?

The first group that helped me shape my musicality was The Harmonics of Felipe Dulzaides. With this group I had the opportunity to know different musical styles and at the same time be able to respect the basic characteristics of each one of them. Then, some of the young people that formed that group decided to create our own band, the Sonorama 6. Being in that group, I received the proposal to integrate the Cuban Orchestra of Modern Music, which had been created recently with what were considered the best 28 Popular musicians of that time in Cuba and that was the real starting point of my career.

In that orchestra I met those who later became my colleagues at Irakere, with whom, in addition to developing more, I was able to give free rein to my creativity and my innovations.

Specifically, Irakere is one of those groups that has no comparison and, until today, nobody has been able to match or exceed the career of all of you. After these years, will it be worth it in the future to teach the boys the "Irakere method"?

In my opinion, Irakere was a revolution within our music and the Cuban musical environment of those years. We not only revolutionized the way we played, but also almost without intending to change some misconceptions that were in Cuba about jazz, rock, and everything that was international music of those years. An interesting fact could be that, even when we were absolutely blocked and did not have access to almost any information of what was happening in music outside Cuba, we were somehow part of the great changes that musicians and international groups like Queen, Miles Davis, John Coltrane, Blood Sweet and Tears, Santana and others made rock, jazz and pop in the 70s.

The guitar is one of the instruments that in Cuba has never been separated from the most rigorous study. Isacc Nicola, Leo Brouwer, Jesús Ortega and you, among others, have deepened their research in this regard. Is the guitar still studying thoroughly today as it should be? Has the younger's interest in the instrument declined? Or, is its execution too commercialized?

Well, although I was closely linked to music education in general and in some cases I was an important part of the changes that were made in the study systems of music schools in Cuba, that was not specifically in the guitar because I am bass player. Anyway, I can affirm that the Cuban guitar school and in general of all the instruments has always been at a very high level worldwide. I have not lived in Cuba for a long time, and I cannot tell you exactly what the current situation is, but when I listen to musicians and Cuban groups, I do not get the impression that music education in general has declined, despite the excessive popularity of some styles that do not have the best cultural proposals.

Cortázar scholars say that the writer claimed for jazz a high level of dignity and efficiency. And I relate this because I do not know if it has interested you at some point to mix music with other manifestations of art, literature itself, for example. Do you have a project about it? Are you interested in the idea of ​​writing at some point about jazz, or telling your life?

Many times I have collaborated with musical researchers: with the Frenchman Patrick Dalmace or the Cuban journalist Rosa Marquetti, giving them my points of view about a certain musical period or telling anecdotes about musicians and artists with whom I have worked. But, although I have written several methods for the study of the double bass that have been published in Cuba and in the USA, I have not written any other type of books. As I prefer to speak to write, I recorded several CDs for the Jazz Oral History Program of the Smithsonian Museum in Washington, talking about Irakere and other aspects of Cuban music and Latin jazz.

How was the idea of ​​working together with Sverre Indris Joner, and this project Clásicos a lo cubano?

In 2006 I traveled to Oslo to offer lectures and workshops about Cuban music. In one of them was Sverre and he proposed me to record a CD with his music. From that moment on, we continued to record and work together and on one of those trips he proposed me to do a concert with the Symphony Orchestra of the National Radio and TV of Norway interpreting his arrangements on some of the best known works of the classical world repertoire mixed with Cuban rhythms. Then we made them with other orchestras and now I accompany him to fulfill his dream of playing them in Cuba.

You return to Havana in the middle of its 500 years, is there any piece in the name of his city?

On this occasion the person who is in charge of the arrangements and the compositions is the Norwegian pianist and composer Sverre Indris Joner and he has composed a beautiful piece called: Danzón for Havana.