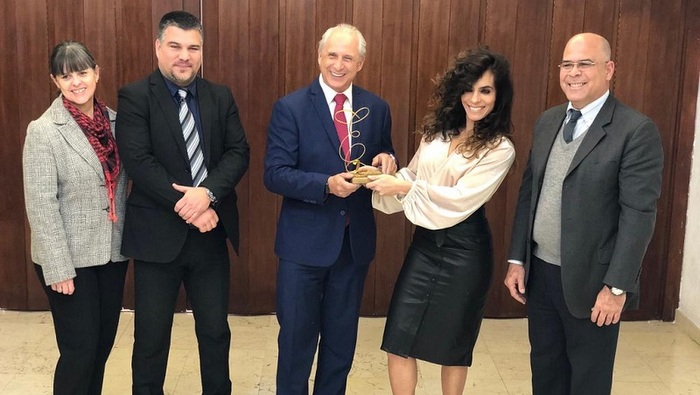 Excited for the Excelencias Award 2018 to the great Spanish artist, for her work in pursuit of the development of flamenco art in Cuba and its link with the project that has allowed the growth of its members, Karelia Cadavid does not hesitate to offer details of how María Juncal has aroused passions among those who love and defend typical Spanish dance worldwide.

La Juncal is considered one of the best flamenco performers of today. She runs her own company, with which she has toured France, Spain, Italy, Holland, Belgium, the United States, Israel, Mexico, Canada, Germany, Venezuela, the Middle East, China and Japan. Just in March María Juncal arrived in Cuba to share her knowledge and keep her collaborations with us ... forever. Following this important recognition to the Juncal, Karelia Cadavid Álvarez recalls some passages:

«In March 2009, for the first time, I arrived, with two of those who at the time were teachers of A Compás Flamenco -project that I direct-, to one of the most emblematic institutions and of more history of flamenco in the world: the Centro de Arte Flamenco y Danza Española Amor de Dios, based in Madrid, right on the heights of a peculiar market, where nobody imagines to find so much magic and above all so much history. In fact, it is also a museum, because its corridors contain photos and posters of the great dancers that in each era made legend. Costumes of representative figures are shown, and their teachers are a cultural tradition in the world. Arriving there already became a luxury and a wish come true.

«We were already in the cradle of flamenco, we were where the art of flamenco was born and polished from the same root. I remember with immense love my days there, see that mural full of photos, schedules and explanations so that each student chooses the teacher he wants ... There was María Juncal, who had seen dancing in Cuba at the 2006 Ballet Festival. »

Joaquín San Juan, director of Amor de Dios - a man of incalculable values, of honesty and, above all, of a human quality and knowledge without equal - had awarded our project scholarships, and among the teachers we chose was María Juncal. It was two in the afternoon and he had just started his class. Joaquin interrupts her to explain that we were from Cuba and that two people would join her class for free. Without thinking, Maria agreed with that smile that always characterizes her. “The day after we joined the center and I was walking through one of the corridors of the institution, she left room 4 and, without further ado, she told me:" I want to be part of the project. I want to go to Cuba to meet him. " It was a moment that I remember so fondly that my eyes still water. This was the beginning of an intense work and an intense road to follow for the development of flamenco, not only in our project, but also in Cuba”.

According to Karelia Cadavid, from the first visit of Juncal to Havana and sharing with the girls and mothers of A Compás Flamenco, it was decided to periodically make his presence in Cuba. The Flamenco for Life Seminars were already held, and the girls, despite their young age, began a preparation based on a technique of arms, body and foot, totally purified, a work that is carried out daily in the small headquarters of A Compás Flamenco, located in the Havana neighborhood of Los Sitios. Thus began the preparation of a quarry with the most authentic flamenco, which made reborn a genre so loved in Cuba.

"María already took care of everything: to help us go back and forth to Spain, so that the teachers of the Cuban project would be at least once a year in Amor de Dios with the teachers, who in fact love us very much. With his technical and methodological advice began to reappear flamenco in a humble neighborhood of Havana, full of legends and charm”.

María Juncal comes from a family with a rich artistic tradition. She is niece-granddaughter of Trini Borrull, who maintained close ties of cooperation and collaboration with the National Ballet of Cuba. In 1986, following the X International Ballet Festival of Havana, Alicia Alonso undertakes the first project dedicated to Spanish dances in Cuba, with the advice of Trini, who taught the first courses to Cuban dancers, with the idea of assuming the Spanish repertoire with the maximum of quality in technique and choreography.

Twenty-three years later María Juncal arrives in Cuba to work with the Socio-cultural Community Project A Compás Flamenco, with the fundamental objective of inserting girls, boys and young people into society through dance. Their challenge is to make them the fundamental artistic quarry that nurtures the different dance companies that cultivate the Spanish genre in Cuba and the world.

Thanks to the ever present collaboration of María Juncal, the Cuban project has been developed and has been awarded twenty-two national prizes and international recognitions from institutions, foundations and / or Iberian associations that are dedicated to Spanish dance and especially to flamenco in the world.

"Always Mary's presence with us is of great significance. Our teachers work tirelessly to maintain their technique and try to surprise the quality of work that has been done with girls and young people. María is an example as a person, of incalculable abnegation, of being hours after hours in a room working to get her ideas out, always looking forward. She is an example as a professional and as a human being”.

María Juncal has taught classes, seminars and lectures to more than three thousand girls, boys and young people who have been part of A Compás Flamenco since 2009 to date and more than seven hundred dance professionals in Cuba.

She has been awarded the Antonio Gades National Flamenco Dance Award in Córdoba; the first Flamenco Dance Prize and Desplante Trophy at the XVLI Festival of Cante de las Minas; Prize for the best flamenco soloist, with the play El Encierro de Ana Frank, in the XV Choreography Competition of Spanish Dance and Flamenco of the Albéniz Theater in Madrid; Honorable Mention of the Gran Teatro de la Habana, for her participation in the XX International Ballet Festival of Havana with her show Destemplao, and now the Excelencias del Arte Prize, in Cuba, in 2018.

Her participation in the XXVI International Ballet Festival of Havana in the past year was cataloged as exceptional by specialists and the accredited press. Since 2009, all the work done by María Juncal on the Island counts with the approval and support of the Cultural Office of the Embassy of Spain in Cuba. His work is endorsed by the highest Cuban and international cultural institutions.

This year, María Juncal has the support of the Office of the Historian of Havana, which considers the third edition of the Intercontinental Meeting of Flamenco, to be held from November 11 to 19, as one of the central activities that will be held on the occasion of the 500th anniversary of the City Foundation. Personalities and artists of great relevance in the world will be invited to this ceremony.

"I always intend for Spain to know and recognize the work that María Juncal does here,"Karelia Cadavid Álvarez tells us. Many flamenco teachers have come to Cuba to teach amazing classes and workshops that we thank with our hearts, but it lasts a week. However, Maria's work is permanent, she is with us always, she does not leave, she leaves us tasks to work on and then she revises them and refines them, that's great.”

Having an artist so relevant to us and not leaving us hand in hand is very, very important as an artistic project. It is a reference and a guide, a person faithful to a cause. Not everyone wants, nor comes to a community project at street level to work for free and to dignify Spanish dance and flamenco in this way. I tell you this because I have been working in this business for more than twenty-two years and almost fourteen years since I founded A Compás Flamenco.

“Those are very unique characteristics that should be known and rewarded, at the level of the Ministry of Culture of Spain, at the level of institutions that know how to recognize the work of Mary, of this great artist who takes off hours of sleep and who is capable of adjust your agenda and your work contracts to come to Cuba. It is good that it is not left in the dark, that it is known, it is our way of seeing and thanking what she does for us, and it is a goal that A Compás Flamenco has drawn up this year.”

“We will be happy when we have achieved that Maria continues to be recognized as she deserves. She already has her Excelencias Award, to which we nominate her, and we feel a great pride to know that she has been granted with Viengsay Valdés, among other personalities. We took this opportunity to give a thousand thanks to those who made it possible for Mary to reach us when we most needed a firm hand to guide us.”

“Thank you, Maria, for always being by our side, for your love and love for the girls. Thank you for being an example of work, dedication and effort”.

Previous publication "Themselves" Warehouse Festival Next publication Mendive in Acacia Gallery: an event at the Havana Biennial