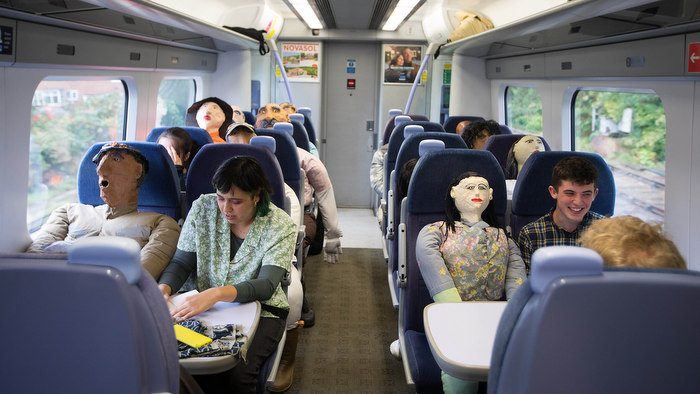 The Colombian-born interdisciplinary artist, Oscar Murillo, has been nominated for the 2019 Turner Prize. The British prize, one of the most established within contemporary art, this year will be disputed at Turner Contemporary in Margate.

Last Tuesday, I participated among 40 volunteers in the artists performance collective conscience; a documented transportation of 20 effigies from London to Turner Contemporary, where they will remain as part of the exhibition. A proposal that further includes the installation of a black drape blocking (partially) the precious view of the North Sea and a 19th century painting.

The following day we met for coffee and conversation at the same station our journey had begun the day before. The result: an insight into Murillo’s social, moral and artistic concerns, a conversation about oppression, movement and Frequencies.

Talk to me about your practice, what does it involve?

Painting, formality, installation, sculpture and how can you create environments to evoke certain emotions; are all part of my practice. At the same time, there are specific concerns in relation to oppression and injustice. Innately there are feelings of anger and I’m trying to identify symbolic markers to underline where these systems of oppression may have originated historically, while mirroring notions of loss and human oppression.

So, what is particular about the Turner exhibition?

I think the show or the installation is coming together through an ongoing inquiry into exhibition making, geography and specificity, and those two things are quite general, so they aren’t specific at all. Referring to the stigma of specificity, there is a painting in the exhibition from 1883 called Lochaber no more by John Watson Nicol. This painting, which I’m borrowing from a private collection, depicts the Highland Clearances of Scotland in the 19th century, a tragic moment that mirrors the current condition. Of course geographically it is somewhere else in the world, but I guess the reason that I wanted to dive into history was to create, alluding to my show in the Kettle’s Yard - Violent Amnesia, the notion of forgetting. Evidently, amnesia is not an ignorant situation, it’s an illness, but I’m interested in the word play, what does it mean to violently forget history? And I use this painting as a starting point. 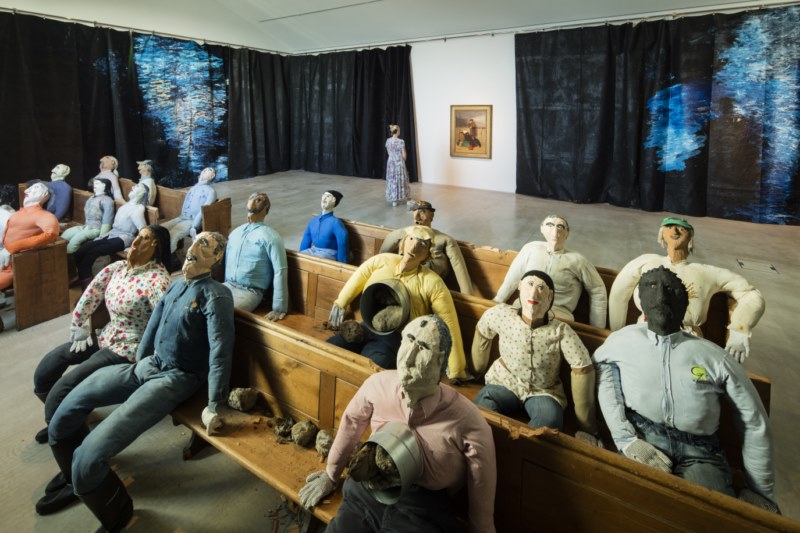 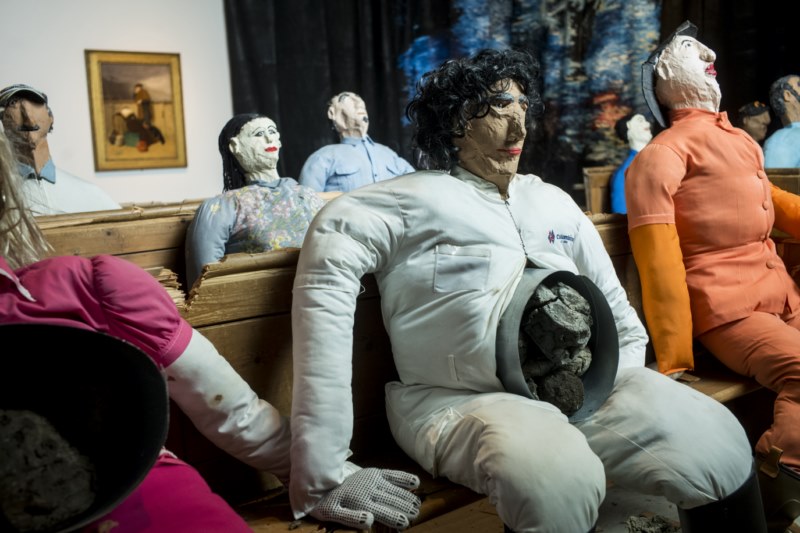 Why can't I see the sea?

The space has a poetry-evoking vista of the North Sea. By blocking it through the installation of a black canvass, you highlight the importance of the view and what has the sea and our relationship to it meant since the beginning of time, then you reveal it slightly, as a desire, as a possibility of hope. 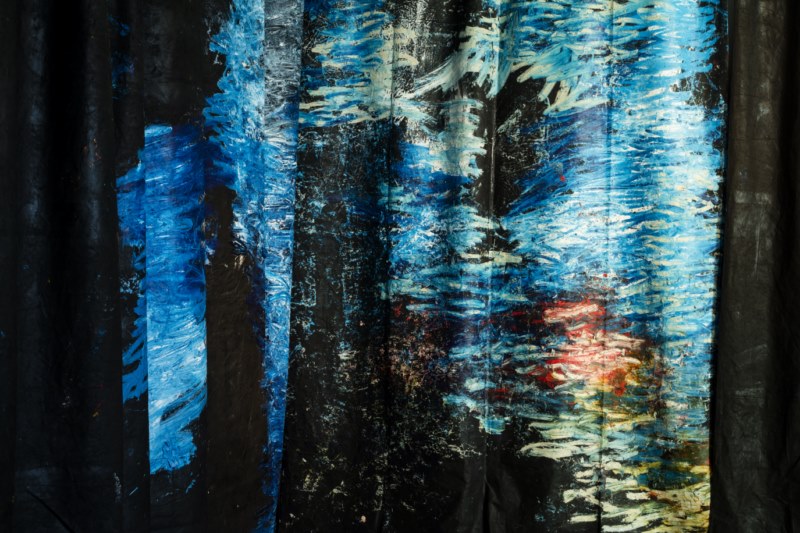 Movement, migration and narrative, seem to be a primal concern in your work. Talk to me about the migration of the effigies from London to Margate.

I think that in this case we can see it as a migration but also as a procession. It’s a very cathartic moment. Here you have these figures that are quite uncanny in a way and it's almost like they’re not from this time, the way they’re dressed, even the way they were made crudely and you’re transporting them from one place to the other, concluding in this violent position of being denied once again. It is a very strong symbolic moment.

In that case, till what point is this performative action important to the work?

I see, let's talk about documentation then. As a performer (transporting the effigies) there is this duality; I accept being filmed under the pretext of documentation but there is also this constant feeling of surveillance that creates a sort of anomalous state. Which in a way you’re forced to ignore, but it’s there. To me, there is a great analogy of being surveilled while moving, especially considering that the journey begins in London.

You don’t have to ignore it. I understand what you’re saying but in this case the filming is not there as theatre, it's a documentation process. On the other hand, of course, this oppression happens to everyone. The thing with society is that it's hierarchical and I hate the idea of picking and choosing. For example, we are here in the cafe (at Kings Cross station) and I’m looking at all of these people moving through that are being exploited too. Most of them are considered middle class. They work in the City of London for crazy hours. They look unwell. Ultimately they might not be oppressed in the same brutal, physical way (to the factory worker) but there is oppression too and there is surveillance. So one could say that the physical brutality of seeing one of these effigies impaled by a pipe could be seen in one of these ‘well off’ people that, maybe, is actually in debt.

I completely agree. On my journey (in the tube at peak hours) here, I experienced a great deal of brutality and aggression. People subject themselves to this every morning because they have to get into the City.

I don’t think they subject themselves to it. They grow into it. Its part of a neoliberal, democratic, capitalist system, it's just the nature of the west and how it has evolved.

But don’t you think there is also an aspect of individual responsibility? Particularly in the western world, where people evermore so are having the possibility of not getting into this carriage if they don’t want to?

I don’t think so. I think It’s a privilege not to. I think to say ‘I’m not going to get into it’ is a form of privilege. 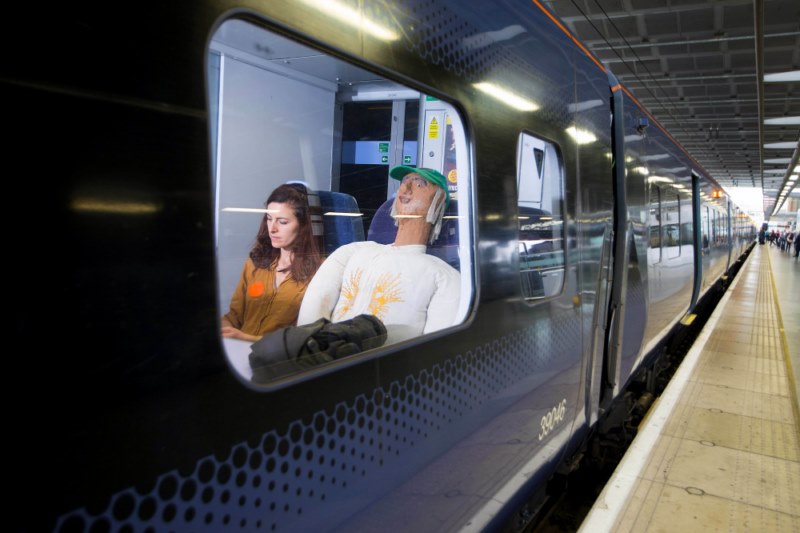 Talking about aggression, I wanted to go back to when you talked about the violent amnesia of history. How is this violent? Is it because we violently reject our history?

No, I think it's because there is ignorance and inability. There is a quote by Hegel: “We learn from History that we don’t learn from History”, it's like we are incapable of learning. Let’s take the example of the Second World War, a huge catastrophic event in human history where we could’ve easily learnt the perils of greed, the perils of capitalism, yet here we are. Society has been created and persisted for more than 2000 years in a system of capital in which someone always has to loose, you can call it Darwinian theory of survival, but it's not really survival, it’s capitalism and greed, which has made war and destruction very effective forms of generating capital for certain societies, creating almost an impossibility of collectivity. There is a lack of collectivity within the human race.

I understand that your art focuses directly on this awareness, but is there an antidote?

That’s a good question. Is there an antidote? I think we could start by having more solidarity towards each other. By abandoning racial, cultural and sociological stigmas and this very heavily ingrained hierarchical system of differences. I think these are simple things that obviously aren’t simple at all because they are very difficult to achieve, but I think it's a starting point for healing. I think we should recognise that we ought to have a system of reconciliation and solidarity.

Do you think there is also an element of hope in the work, not only of anger?

Absolutely, which is not physically there, but my project Frequencies is something that aims towards hope; like, ‘okay, let’s work with the future’.

Can you tell me a bit about that project?

Frequencies is a project that I started with political scientist Clara Dublanc 7 years ago, the project sends pieces of raw canvas to schools which are affixed to students desks and are collected a year later.

The initiative began as a thought on drawing, collaboration and horizontality. I like to use this word 'horizontality'; it refers to the equator line. I see the equator line as a representation of equality, of the cultural separation of North and South. The equator is a zero moment, an anchor from which you can experience the world effectively from Africa, South America and Asia, and from which you can move up or down if you want to, creating frequencies.

It’s been our endeavour to really disseminate this project globally without a sense of social, geographical or economic judgment and to work with children primarily from the age of 10 to 16, who, to me, are in this place of fight. Fighting their levels of purity as human beings that are in this world yet voiceless. I see them as recording devices, recording everything and then unloading that information by drawing.

Do you think that performative action is a good mechanism to claim the Self, or to at least express the Self?

The idea of performance activity is that it's being rehearsed and therefore it is no longer an automatic gesture but it’s something known. I’m more interested in automatism, for example, I know that the moment I put these canvases, the kids are very conscious, they think I’m going to write this or that, but because they are there for a substantial amount of time, that consciousness, that lucidity disappears and you have a much more fluid moment of the unconscious coming in and actually taking charge where we can witness, because of the stage that they are at, a level of purity.

So in a way, the consciousness that you’re trying to bring through this artwork (the Turner Prize piece) is also a purification of the mind. By creating a consciousness of historical violence, capitalism, migration, we may purify the mind of prejudice, with the hope of becoming human again.