Inside Rain at Excelencias Cultural Space 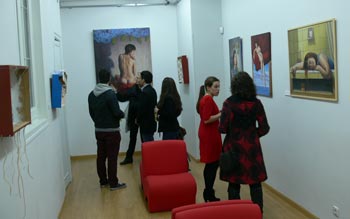 The Excelencias Cultural Space will have its grand opening in Madrid on Nov. 26 with the Inside Rain exhibit by Andres del Collado and commissioned by art historian Elvira Rilova. Del Collado, a Mexican-born artist who settled down in Madrid a couple of years ago, is no doubt the bearer of his country’s solid pictorial tradition, represented in his case by murals and an intimacy-oriented surreal trend.

Good cases in point are, on the one hand, his way of painting human figures, and on the other hand, his recreated environments always dotted with puzzling touches that hint at spectators with a feeling of a multiplicity of approaches –both sensorial and conceptual- to his work. Murals have also been present in the most literal part of his career since he’s been involved in a number of projects for public spaces. 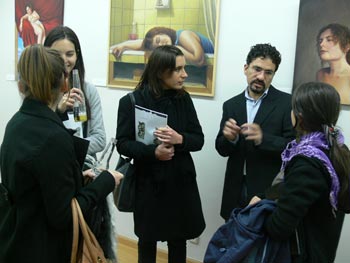 And when it comes to painting, he’s always leaned to surrealism, yet in both forms of expression he’s taken his art to the utmost: hyperrealism. Andres studied Graphic Communication Design and Fine Arts in Mexico City.

In this, the season’s opening exhibit at the Excelencias Cultural Space, water is the name of the game as a life-giving element in which Andres del Collado’s works represents a journey into unconsciousness, the bond between dreams and reality.

As the heir of Rafael Cauduro’s hyperrealistic work, the artist comes up with works sprinkled with dreamscapes and inquiries that wink at the most folkloric Mexicanism and toy with elements that jump out of the canvas only to run through the edges of the easel, sliding into the most absolute materiality, goading spectators into a reciprocal identification with the artwork. Inside Rainwill remain open to the public thru Dec. 19.