A few days ago, I received an updated piece of information on the 2013 edition of Art Madrid that actually surpassed all my expectations.

A six-page text – containing more than twenty quotes – backs up Off Land, arte y sociedad project, conceived by the organizers of the Fair to change their not-so efficient structures in terms of art market, looking in curatorial projects an alternative that allow them to position, maintain and reactivate their sales network. 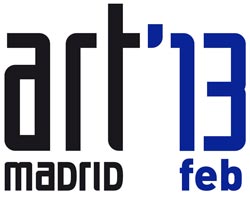 This wish to convince through the reflection with press releases, which are always brief and positive, turns out to be a first-sight contrast. If market spaces become centers of reflection and analysis, gathering risky projects from a curatorial and market approach, aren’t they too close to the Biennial model? What would be the role to be played by this kind of events within the international circuit?

“It’s obvious –perhaps too obvious– that the core of an art fair is represented by the economic transactions that take place within its framework, because these shows wouldn’t exist without them; but that doesn’t fall far from saying that Einstein wouldn’t have created the Theory of Relativity if he had starved; and, on the other hand, it is incorrect because, as every gallery owner knows, fairs are great opportunities to develop new relations with buyers, gallery owners and other agents from the world of art. Furthermore, just as it was pointed out on the catalogue of the last edition, programs such as Young Art, for example, attract that young public that will become collector tomorrow; programs like Art Edition promote collecting by giving value to the vast, rich –and nearly unknown– world of the original graphic work, which is more affordable for domestic economies; programs such as Art Show revitalize fair spaces by breaking the monotony of booth distribution and make them more attractive for visitors, promoting their optimism, joy and interest. Fairs, all in all, encourage –and need– many kinds of transactions”.

This seems to be today’s reality. It’s not only about Art Madrid. The phenomenon is gaining momentum worldwide: instead of looking alternatives to a closed structure, we have dynamited the essences. But the final objectives are the same anyway.