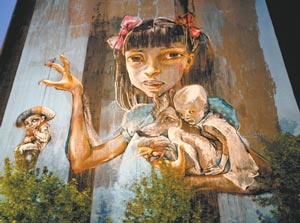 Placing art in the first levels of interest among different publics is a true challenge for a nation that is intensely marked by history and popular culture. 2012 was a good year, with several exhibitions carried out by national and foreign artists that draw attention of the public, and had impact on the artistic production.

Within the framework of this new wave of visitors, the attendance of viewers to contemporary art exhibitions gained momentum in two of the shows by Antiguo Colegio de San Ildefonso: Ron Mueck, with over 400 mil visitors and La lengua de Ernesto. Mexican artists were also promoted overseas, and there was growing interest from the most important auction houses of the world.

Likewise, Fundacion/Coleccion Jumex, one of the most important representatives of contemporary art in Latin America, displayed two exhibitions in 2012, and is presently building a new space to be inaugurated this year, so as to show works created by Francis Alÿs, Olafur Eliasson, Felix Gonzalez-Torres and Gabriel Orozco, among others, and generate educative programs that support the researches.

Along with the most “traditional” art displays and the collections, the events represented the key to the dynamic vision of contemporary art in 2012. All City Canvas was the first edition of an urban art festival that took Mexico City as stage and the canvas were different locations with the presence of nine international artists. So the Festival favored an approach to the city casual viewer, and generated more tourism for these zones. On the other hand, ZonaMACO strengthened its position in the ninth edition as an essential event to the market of art in Latin America. The parallel activities included sme of the best exhibitions of the year, such as Minerva Cuevas’ retrospective at the Museum of Mexico City, X is not the new Y by Rafael Lozano-Hemmer at OMR gallery, La institucion redentora at Siqueiros Public Art Hall in collaboration with the Tate Modern, Carbon by Tony Orrico at Polyforum Siqueiros, Extranjerias at the University Museum of Contemporary Art and Quodllibet by Pablo Helguera at Fine Arts.

The panorama was undoubtedly intense. Let’s see what 2013 holds in store for us.