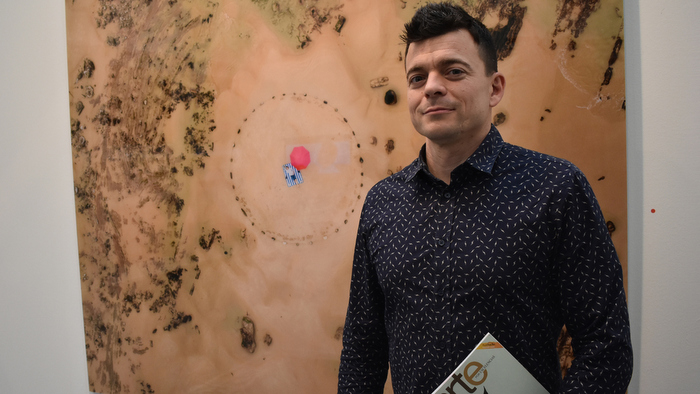 The 14th edition of the contemporary art fair Art Madrid has had Rubén Martín de Lucas as a Guest Artist. At the entrance to the Galería de Cristal a new installment of his "Repúblicas mínimas" welcomed visitors and in several spaces of the event his works could be purchased, especially a limited edition book (150 numbered and signed copies).

Arte por Excelencias, media partner of Art Madrid 2019, took this opportunity to speak to the Madrid artist, engineer and co-founder of Boa Mistura, a group noted for its interventions in urban art in countries like Brazil, South Africa, Germany, Mexico or Norway

Rubén, what has been the welcome that an artist like you has had ...

Very good. The truth is that I am very happy with the receptivity of the people. Both the photographs and the video installation of the entrance (formed by 12 screens and made with the collaboration of Sono, a leading brand in audiovisual technology). And, besides, I think it has also had a didactic part, to bring people to the video. Many people are interested and start asking about how the video is collected, how can you approach that medium, acquire it; It is something that the general public does not know about.

At the fair level it has also been very positive, to give visibility. Having such a great video piece is very good for the fair.

Recently, you affirmed: " Repúblicas Minimas is a simple gesture, a country that lasts a day, inhabited by a person. A ridiculous and ephemeral border that speaks of the incapacity of man to live without borders, without walls ". Will you continue to make minimal Republics as long as there are borders?

Repúblicas Minimas is a project that started with only three actions, but I saw that it had a great educational and reflection potential. And that's why I made the decision to continue making Republics until the borders or I cease to exist.

For this fair I made the last three, 12, 13 and 14. They are that circle of stones on a beach that the tide sweeps and ends up taking, a triangle made of dried leaves and the square of pink carpet on a green meadow.

To create these Republics, you own 100m2, draw a border and inhabit it for a day ... How do you choose the landscapes in which you intervene?

I usually choose absurd places where no one would ride a Republic. Sometimes they are in the middle of a parking lot or a fallow land. And then it has a visual component, plastic, so that this piece has a beauty per se.

I seek that the pieces have an autonomy, that who does not know the concept that is behind feels that power and that call. And once scratch and investigate in the reflections that the piece proposes, they find that there is a questioning of the borders, of the concept of ownership of the land, something that man has very assumed. We believe that the earth is ours when it is rather the other way around. The earth transcends us in age and perhaps it is we who belong to the earth.

There is always a philosophical background, some concerns that are what I then seek to translate through any medium. I use painting, photography, actions in the landscape or video to translate it into a work and reach the viewers.

Behind these works is there a gallery supporting you?

In this case has been Art Madrid. And then there are galleries that I work with, like BAT Alberto Cornejo (Madrid), AP Gallery (Segovia), Bea Villamarín (Asturias) ... there are five or six galleries that I work with now, and the truth is that for an artist it is fundamental that they defend their work, and that they dedicate themselves to that part of selling, that we need, because unfortunately we can not live off the air, although sometimes we would like to.

Yes, in AP Gallery, the gallery dedicated to art and landscape, which is in the Sierra de Ayllón. Although I do not rule out taking it to more places, because it speaks of the Nation concept, of how a nation is a mental construct present in the collective imaginary. There is nothing solid, there is nothing permanent in a nation and, like an iceberg, it is condemned to be diluted.

Some reflections much needed in these times, where politicians polarize everything, playing with our feelings, play with that abstraction called country that does not exist in a real way, and end up pushing us sometimes to hate people who do not know, for the simple fact that they were born on the other side of a fictional line.

In addition to these projects, in which Rubén currently works?

I have a list of around ten open projects. I am taking them in parallel, I feed them little by little until there is someone who always takes the lead, and with the excuse of making some exhibition or presenting it somewhere, I impel it, materialize it and present it.